How to Get More From #GivingTuesday 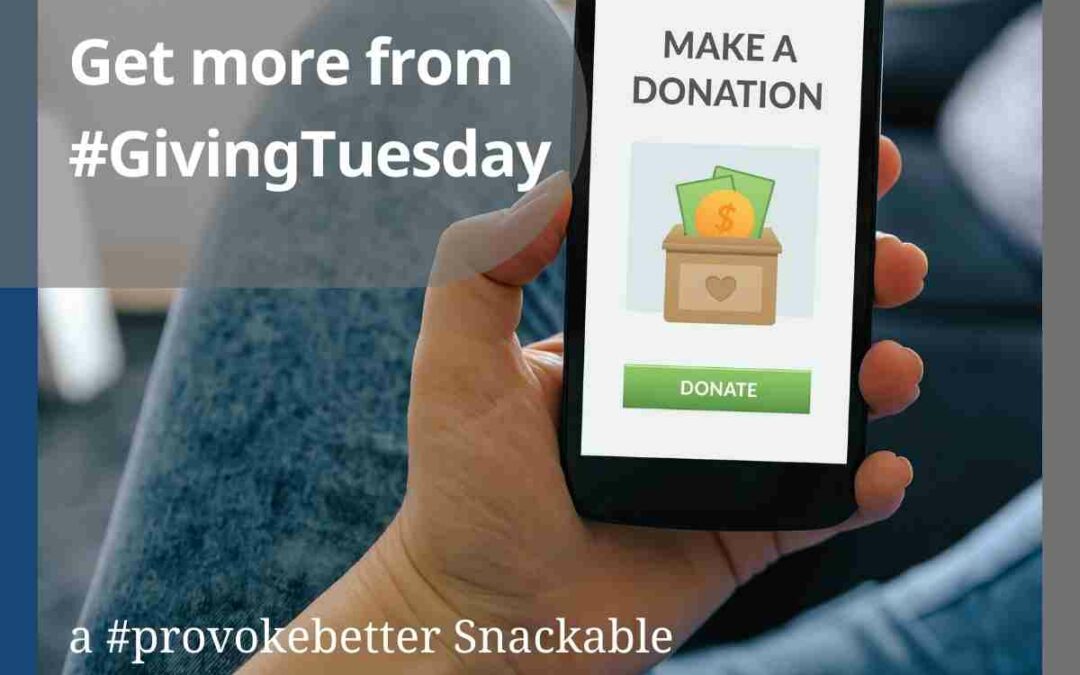 Messaging secrets that nonprofit organizations can use to boost donation now, and any time of year.

This is the fourth installment of our Snackable Series Live on Marketing Messages. The text below is adapted from our Live conversation.

Giving Tuesday is just under 10 years old. It’s a relatively new “holiday”. But it’s a way to help remind us civilians that generosity is something that is great to practice, particularly near the end of the year, when the nonprofits are trying to make sure that they have exactly what they need to continue with their great programs.

And sometimes we’re looking for a tax donation. So it’s a win-win situation.

The problem is that many nonprofits don’t really have a lot of creativity behind their Giving Tuesday messages. It’s kind of bland, vanilla stuff like: “Hey, it’s Giving Tuesday. Don’t you want to support us?”

They really haven’t done a good job of connecting us with the mission, or connecting us, as potential donors, with what’s in it for us.

Even as we give money, there’s a reason we’re giving it. There’s something that’s connecting us to this giving. And it’s the nonprofit’s responsibility to help draw that out.

So on today’s Snackable, I hope to give you a few tips on how to do that. And we’ll take a look at one nonprofit that I think is doing a really good job of it. And maybe that’ll give you some ideas for how you can do it as well.

The Resource You Need To Craft The Perfect Message

The very first thing we’re going to do is go to my favorite free resource to craft your marketing message: mystorybrand.com. They’ll ask you to set up a free account and a couple of demographic questions: 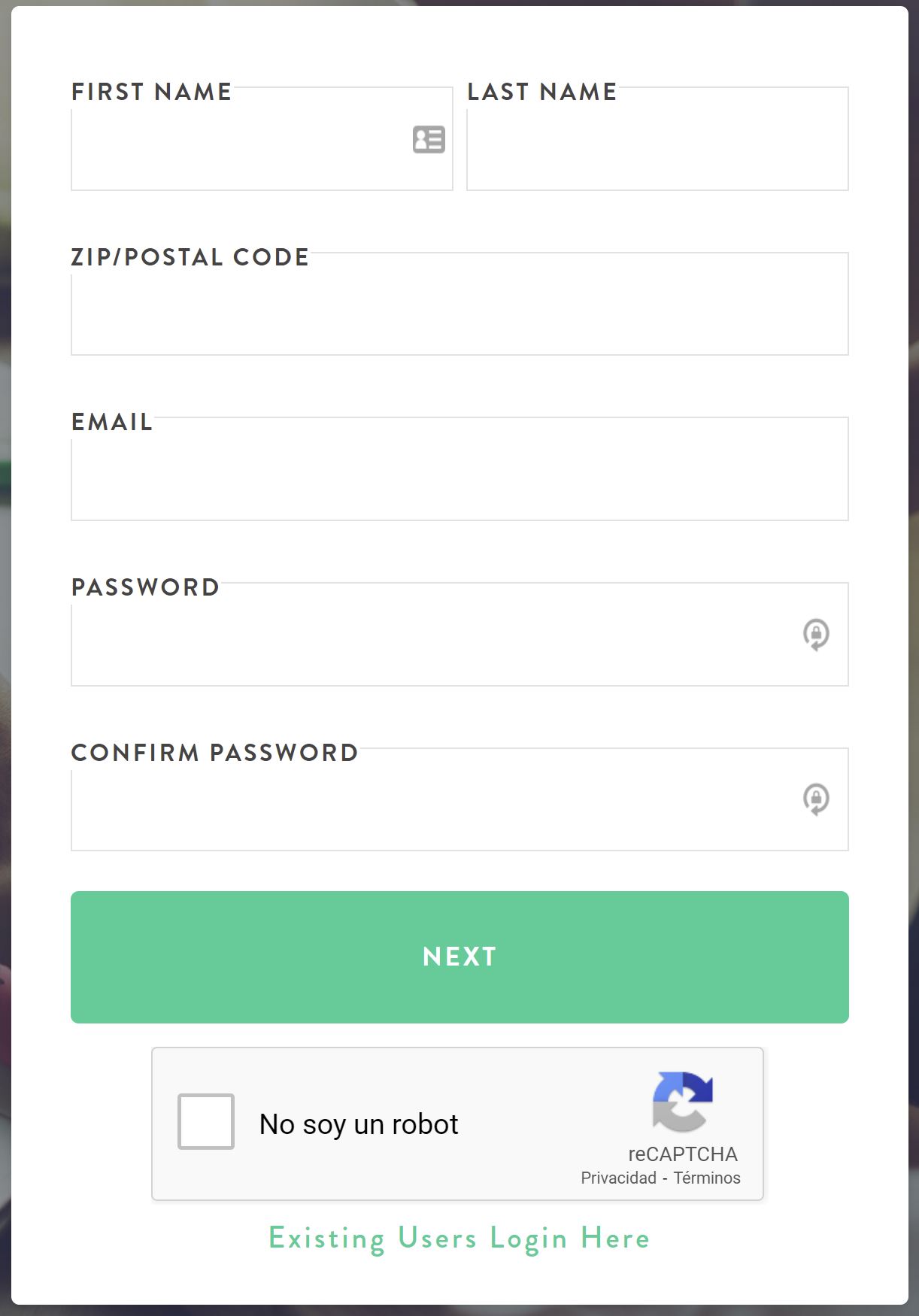 And then you get this online digital BrandScript: 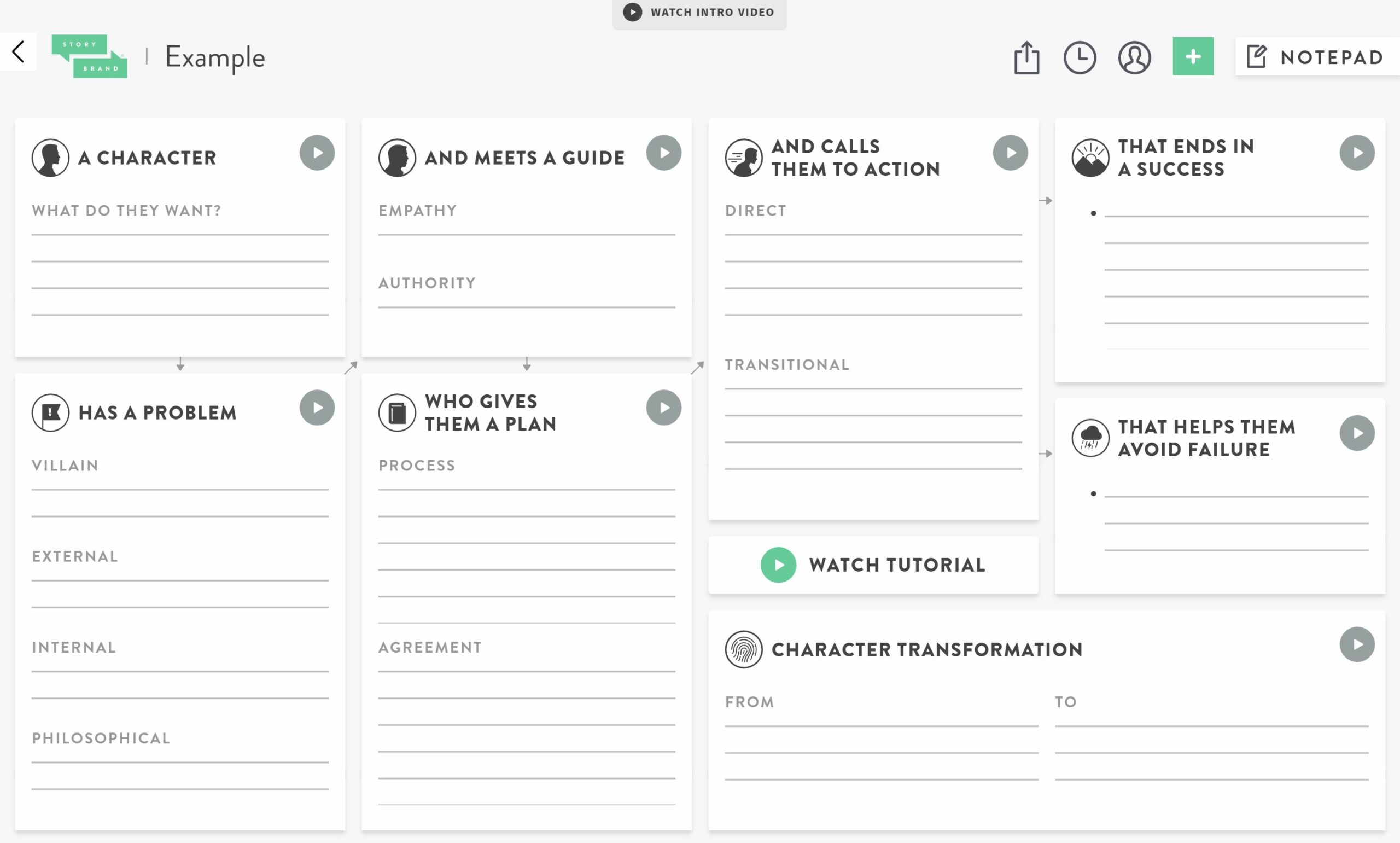 Now, you know, I’m a big fan of story. I’ve used storytelling elements for over 15 years producing great videos, including some fundraising videos that helped nonprofits get thousands and thousands of dollars in extra donations.

And the structure of StoryBrand that I use for videos is the same structure that you can use to create social media messages, email campaign messages, special end of the year asks, and everything related to the Giving Tuesday campaign material that you want to develop.

So go to mystorybrand.com and get that free account. Once you’re on the platform, you can go to each one of the story module sections, which also gives you some prompts on how to build your story, starting with the character.

Now, the very first thing you need to understand for writing a message for your nonprofit is that you actually have two different types of message structures.

You don’t want to mix them and match them in any particular message, but you could find a way to use them both. So let’s take a look at what each of those are.

Every nonprofit needs to create a mission-based script. And again, by script I mean those seven story elements that we just saw in the StoryBrand framework.

This script is what talks about the recipients of your services as the heroes have their own stories.

So, in creating a mission-based script, you put the people that you serve, or the animals, or whatever it is, at the center of the story. They are the characters, if you will. What StoryBrand calls the “hero” of the story.

And we want to see the rest of that story supporting the character. Supporting in this case, the recipient of your services.

Case studies and testimonials are great to use here.

You can talk about how someone’s life was like before they had access to clean water, for example. And then what your organization did to help them get clean water safely, and then what their life is like after.

Showing that transformation is such a compelling storytelling technique. You can use it for Giving Tuesday, and in every single campaign message. Show the before, how does your organization help, and what their life is like after.

This is how you connect a potential donor, whether it’s of my time, my treasure, or my talents to your organization.

Mission-based script is the one that every nonprofit needs to have. There’s a second type that you optionally can add as well. And that’s the donor-based script.

This script puts the donor as the hero, and it can be effective as well.

By contributing to the organization, donors are fulfilling a need to. We want to enlarge our legacy, we want to build a better world, we want to increase justice.

There are reasons that we feel like we want to connect ourselves with the success that your organization is helping to bring about. That’s what a donor-based script does.

So now that I’ve given you the quick reviews, let’s look at those script components again, for just a moment.

The Components of Your Script

Remember, in the mission-based script, the one script that everyone must have, you want to put the recipient of your service right in the character, they’re the hero. They’re the ones going through the adventure.

The pre transformational adventure, it’s always rough, right? Then what’s the problem? The problem could be: “I don’t have access to clean water. It’s unsafe for me to trek five miles through the African jungle to try to get clean water. And it puts myself and my family at risk when I don’t have it.”

Those are problem statements. If you’re working for the environment, you could be trying to make sure that pollinators are here to help our plants stay healthy.

In this example, what’s the problem? Well, the bee is having a hard time. And why is that? Well, because pollution is up because pesticide use is also up because access to the types of wildflowers that are typically native to the area are down, these are all problems.

Your organization then comes in as the guide, that’s our third piece here. And the guide is the person, or in this case, the organization that is credible and empathetic.

They’re in the position to solve this problem and the donor is helping. So the donor almost becomes a sidekick, if you will, with the organization and together, you guys are helping resolve this issue that your main character has, that the recipient of your program is facing.

And that’s exactly why you’re in business in the first place, right?

In a Giving Tuesday campaign, it can be kind of tricky to talk about all seven elements present on the Brand Script model we’re discussing.

So I’ve highlighted the three that I find are most important and critical:

Always Remember to Include a Call To Action

Now, this may seem obvious to you, but you would be surprised at how many campaigns I review where the call to action is a little weak, soft, confusing, and sometimes not even there.

The call to action is the thing that triggers people to take response. It’s the piece of communication that tells them how to respond.

It may be as simple as a “Donate Now” button. It may be: “Volunteer Now”. Or maybe: “Take the pollinator safety pledge”, where the person vows to plant five native flowering plants in their garden for Spring.

The point is that whatever it is, you need to be as specific, clear, and concise as possible, because you don’t want people being confused, burning extra calories and trying to figure out what it is you want from them.

So make it really, really easy for them to go there.

Let me give you an example of an organization I think is doing all of these things well. 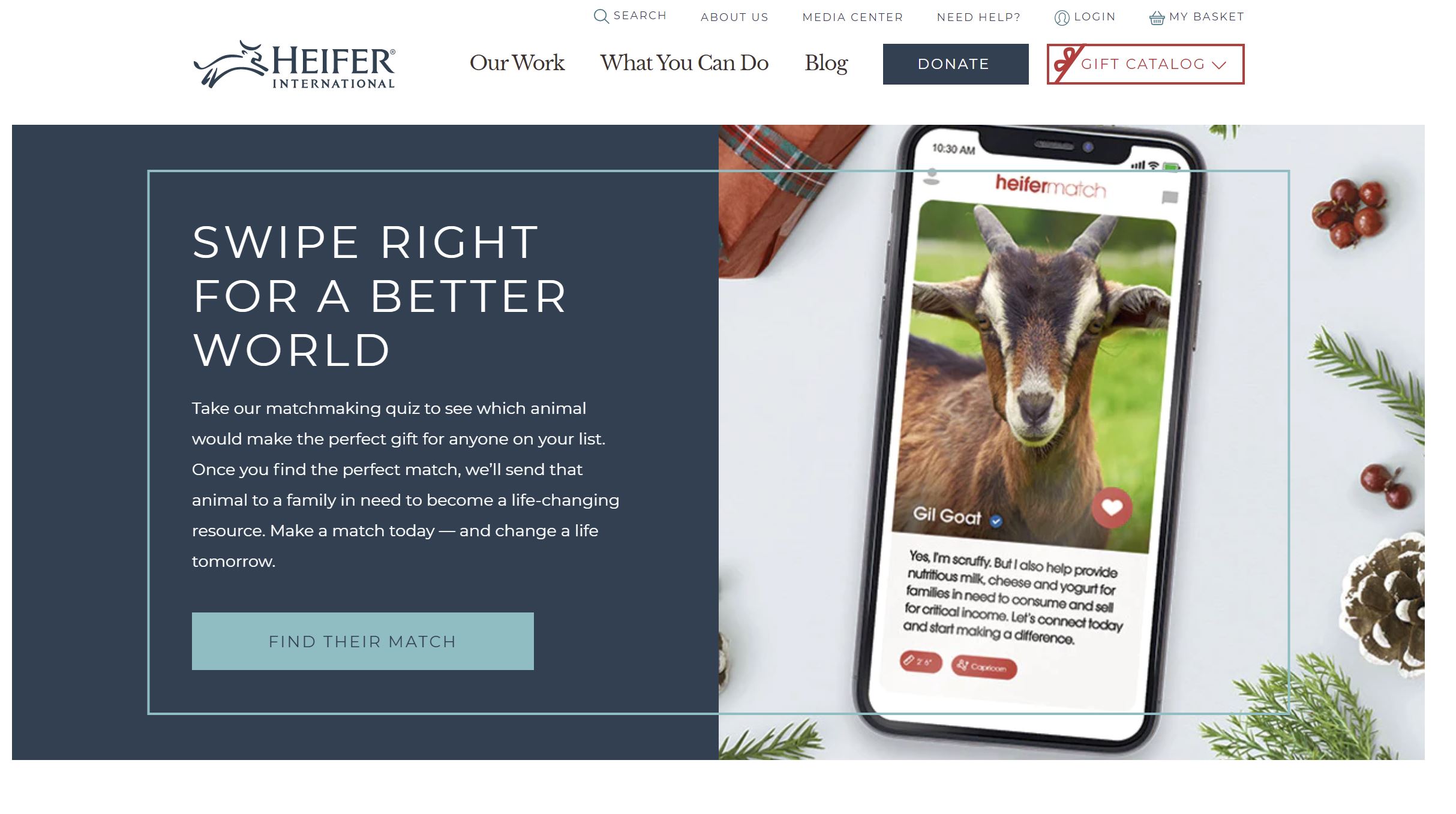 This is Heifer International, and perhaps you know this organization, but if you don’t, they help people around the world get animals in their lives that can help them raise their own food and create their own clothing.

And all of these things help them with not just their own needs, but in some cases help them to generate revenue, which helps them take care of their families and their communities as well.

So as I look at the homepage for Heifer International, I see right away I understand what it is they do. They are in the business of connecting animals.

Giving an animal is like giving someone a small business providing wool, milk, eggs, and more.

And the picture in their homepage is something that shows the after transformation. It’s a person that they’ve helped.

The problem is implied in the homepage here on the website, but what we see is success. And one of the things that I learned decades ago when I first started working with nonprofits is that most people don’t give to need, they do give to success.

They want to see images of your program’s recipients succeeding because of the work that you’ve done. And I think that’s particularly critical during Giving Tuesday time.

Whatever it is, we want to feel like we’re on the right side of it, and we’re winning. So, images can help you really demonstrate that a great deal.

If you want more resources from StoryBrand for nonprofit marketing messaging, they just released a couple of podcast episodes on the subject.

And they took two half hour podcasts to talk specifically about how you can use this story structure for nonprofits.

The first one is the one that talks about the mission-based script and the donor-based script in more detail than I have time to share with you today.

And then, part two talks about the four different types of nonprofit work. The goal is to help you understand if you’re in the business of offering relief, development, empowerment or justice.

So go to Apple Podcasts or wherever you find your favorite podcasts, and look for the Marketing Made Simple Podcast. I strongly encourage you to listen to those two.

Just in that hour that you’ll spend between those two podcast episodes, I am confident that you will be able to improve your marketing messages and really make a difference in your Giving Tuesday campaigns and throughout all of your giving campaigns.

Again, because I’m a Certified StoryBrand Guide and a Business Made Simple Coach, I am well connected with the StoryBrand community.

And I find over and over again that the structure that they bring to the story helps connect businesses with clients, nonprofits with donors, great candidates with great jobs.

The Livestream happens December 6th, and 7th. And it is a way for you to really create all five of the major components that you need for any successful marketing campaign.

You can attend just the Livestream and during the breakout sessions can choose to be in my breakout coaching room. So you get to work with me and the other people in that small group environment as you’re developing the core pieces of the materials.

Or you can get some optional upgrades, including an action toolkit, or additional coaching from me so that even after the workshop you can be sure that your materials are completely tuned in cut, finish refining the text and the copy points that you use, and confidently launch that.

So if you want to get more information on that, please go to this link to schedule a Live Registration Call with me, where I’ll be happy to answer any questions that you have.

I can’t wait to see you on the inside of the Livestream experience!

Want to lower your marketing expenses?

Why stay stuck one moment longer? A Marketing Workshop is just what you need!